The Schuylkill River that flows through this cluster is the Delaware River’s largest tributary.

The Middle Schuylkill Cluster covers more than 500,000 acres and includes much of Pennsylvania’s Berks and Montgomery Counties and parts of Bucks, Lebanon and Lehigh Counties. It encompasses portions of the Schuylkill’s largest tributaries—Perkiomen Creek, Maiden Creek and Tulpehocken Creek—as well as Manatawny Creek and Monocacy Creek.

Historically, this region was the “bread basket” of colonial America because it contains some of the basin’s most fertile farmland, and many of its communities are still tied to the land for this reason. These five sub-watersheds are primarily rural, with 77 percent of the lands in farms or forests. Farmers use the land for row crops, pastures, dairy cattle and other livestock.

Forests are associated with well-known highlands in the region, including the Oley and Unami Hills, Kittatinny Ridge and South Mountain. Reading and Pottstown are the biggest urban centers, though the cluster organizations have excluded much of the most-heavily developed areas to maintain focus on agricultural issues. 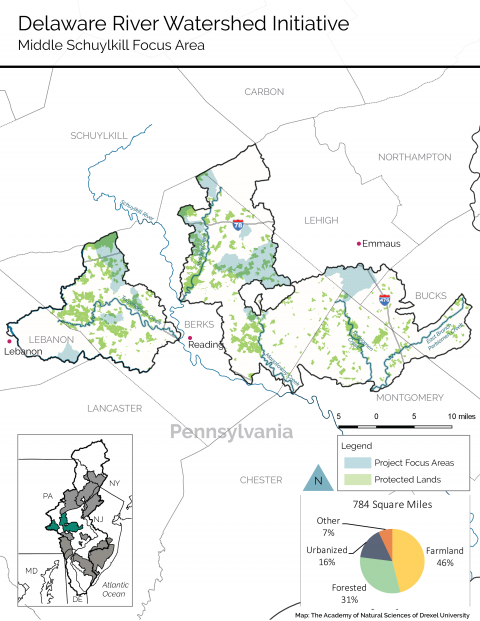 Pollution from the region’s many farms is a longstanding threat to the area’s water quality. The large number of small farms, each with its own management practices, makes it difficult to address the issue at any scale. A new challenge is the influx of large poultry operations, whose large volumes of chicken manure and stormwater run off from the expansive roofs and work pads.

Residential and commercial development represents another threat to water quality: intensive human activities reduce the area where infiltration to ground water can occur.

The Middle Schuylkill Cluster contains 1,191 miles of streams, including 182 miles of High-Quality and Exceptional-Value streams that drain from the most-heavily forested lands. These important ecological and recreational resources support the greatest diversity of aquatic and terrestrial plant and animal life, and are popular fisheries for wild and stocked trout. The cluster also provides drinking water to more than 350,000 people nearby and downstream in Philadelphia. Regrettably, intense land and water use have so degraded 352 miles (29 percent) of these waterways that they are on Pennsylvania’s list of officially impaired streams. Hundreds of additional stream miles are also measurably degraded.

Agricultural practices and increasing urban and suburban development have caused the poor state of these streams. Many farms lack stream fencing, secure manure storage and plans for erosion control and nutrient management. This leads to erosion, nutrient loading, sedimentation and the presence of pesticides and veterinary pharmaceuticals in the water. Land conversion and the loss of forested buffers have increased stormwater pollution throughout the area.

Assisting farmers to improve environmental stewardship practices has numerous benefits. Among them, the implementation of additional best farming practices will reduce the negative impacts of agriculture on water quality and will also help support and strengthen farms, keeping them productive. The open space agriculture provides is part of the fabric of the region and essential to preserving the sense of place.

Accomplishments to date: Middle Schuylkill groups and their partners have worked with dozens of farms, installing best management practices on 3,000 acres of land, including riparian forested buffers on almost 100 acres. They have also monitored 15 sites for water quality. Demonstrations and educational programs reached more than 1,500 students and adults in 2017 alone, and 18 adults have completed training to become Berks Nature Ambassadors.

The Initiative will document and assess implementation of the Middle Schuylkill plan in three key areas:

Thirteen in-stream monitoring points will be located upstream and/or downstream of completed best management practices, and sampling will focus in the Maiden and Saucony Creeks. The monitoring will include Benthic macro-invertebrates, extensive chemical and fecal coliform monitoring, and visual habitat assessments using state protocols. Initiative organizations will photograph best management practices installed at each farm site, and a trained biologist will monitor the sites at least biannually to assess compliance, vegetation growth and functionality. Local watershed organizations will help develop a volunteer-led water-quality sampling program in the Maiden, Tulpehocken, Manatawny and Upper Perkiomen Creek watersheds.

The partners are leveraging a William Penn Foundation grant and working with other foundations, agencies, businesses, and individuals to raise $4.5 million to $7 million for best management practice implementation, outreach materials, and demonstration project materials.