These Pennsylvania waterways generally run west to east, from the forested hills of the Hopewell Big Woods area of southern Berks and northern Chester Counties, across a mix of pastoral and suburban landscapes, to the Phoenixville area—where both the French and Pickering Creeks empty into the Schuylkill River. Hay Creek is an exception, running southwest to northeast and emptying directly into the Schuylkill River at Birdsboro.

Much of the land is wooded or in agriculture. Pennsylvania’s French Creek State Park and the National Park Service’s Hopewell Furnace National Historic Site are both in the heart of the Hopewell Big Woods, along with the Crows Nest Preserve of the Natural Lands Trust and State Game Lands 43. Chester County’s Warwick County Park is located near the lower, eastern edge of the Hopewell Big Woods. There are many other municipal parks throughout the cluster. Birdsboro Authority, the water provider for the borough, owns a 1,200-acre tract just northwest of French Creek State Park that is under a federal “Forest Legacy” conservation easement. 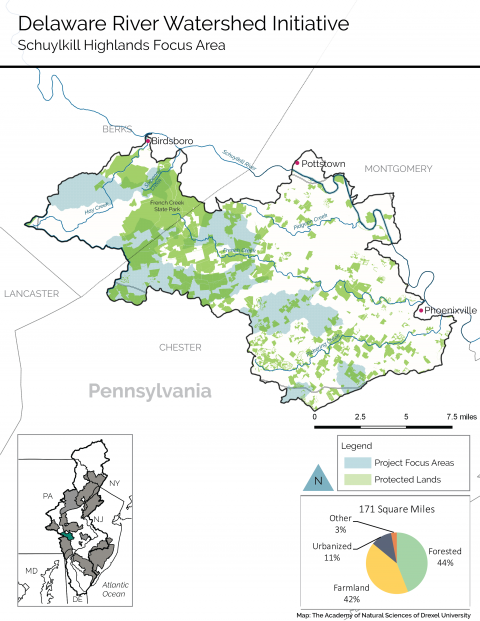 Conversion of forest and farmland to suburban development is compromising the region’s ability to produce and maintain clean, abundant water. Extensive paved areas flush storm runoff into streams, causing floods and scouring stream channels. Less water soaks into the ground to feed streams during dry periods. Some local waterways already show the effects of flashy storms and pollution. To complicate matters, federal and state regulatory changes are shifting some responsibility for water protection to municipalities.

The Schuylkill Highlands include a unique concentration of the state’s Exceptional-Value and High-Quality streams close to Philadelphia. Both Chester County and Berks County have identified the Hopewell Big Woods as an important conservation area, and many of the municipalities have programs that help to protect their remaining open lands, resulting in 31,840 acres of protected land (about 30 percent of the entire area).

In Berks County, where many of the high-priority lands are located, diminished public resources for forest preservation present an ongoing challenge. The principal threat to this cluster’s streams is development and suburban sprawl. Development converts natural and agricultural lands to acres of roads, rooftops and parking lots. It first disturbs the earth and washes sediment into streams, permanently modifying the flow of water through the stream system by increasing the volume and speed of stormwater run-off. This conversion of land has reduced the size of streamside forests—a natural buffer essential for maintaining in-stream ecosystems.

Chester County has long been one of the fastest-growing counties in Pennsylvania. Low-density suburban development is spreading from the south and east to the north, especially in Schuylkill River municipalities and the Route 100 corridor. The negative impacts of development have particularly affected water quality in the Pickering and Stony Creek watersheds.

Accomplishments to date: The partners have initiated projects that will protect 508 acres of land and monitored 50 sites for water quality, building on a legacy of conservation work that has already preserved more than 40,000 acres in the region, including land in and around beloved landmarks such as the Hopewell Big Woods (the largest unbroken expanse of forest left in southeastern Pennsylvania), French Creek State Park, and Hopewell Furnace National Historic Site.

Projected outcomes: Over the next three years, the partners will permanently protect 2,900 headwater acres and 8 stream miles. Restoration practices will be implemented on 325 acres of farmland and 10 urbanized acres that cause stormwater runoff. Riparian and other critical habitat will be restored on 57 acres of private land, and three municipalities will upgrade ordinances and plan or implement green stormwater infrastructure.

A rigorous water-quality monitoring program will help determine if conservation/restoration programs are producing the intended outcomes. The key water-quality indicators selected for monitoring include macro-invertebrates and freshwater mussels; chloride, conductivity and acidity; total phosphate; nitrate and dissolved oxygen; and suspended solids. Sampling in the headwaters will also monitor bacteria levels including fecal coliforms. GIS modeling will integrate weather, land-use and stream-sampling data to identify variables that account for year-to-year fluctuations.

The conservation partners seek to raise $10 million to supplement $1.8 million from the William Penn Foundation. Public and private sources include grants and financing through municipal and county open space programs, the Schuylkill River Restoration Fund, and federal and state agencies.